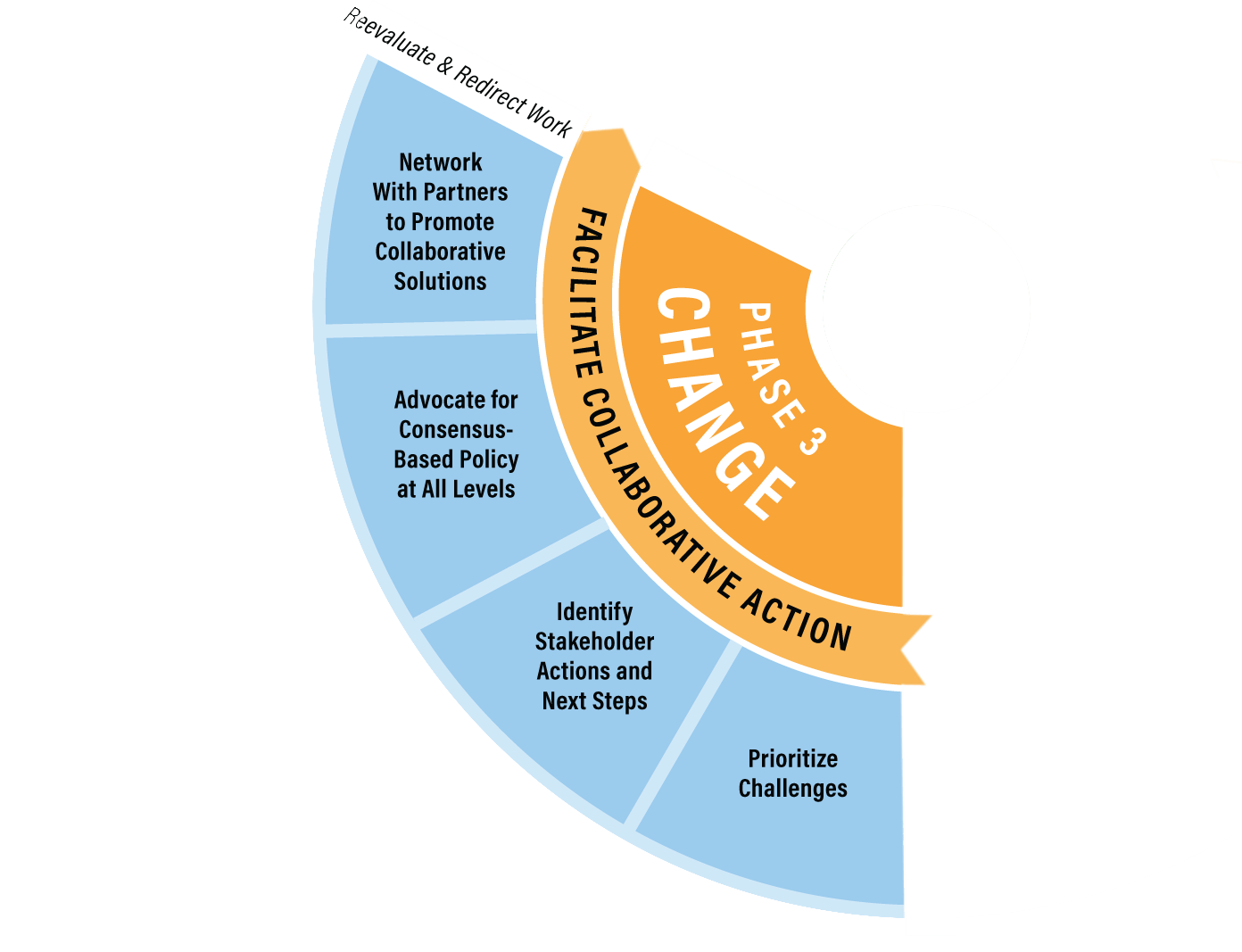 Every TFD initiative seeks to facilitate collaborative action at multiple scales. Phase Three is when participants and institutions push for change based on the potential solutions decided-upon in Phase Two. Collaborative action can occur at the international, national, local, or institutional level. This phase is typically conducted during a dialogue, after an individual dialogue has finished.

During dialogue, participants are asked to prioritize potential solutions. Facilitators use dot polling, mediated discussion, and in-seat voting to assist participants. Through this process, stakeholders reflect on field visits, reports, and conversations from the dialogues. Facilitators will often encourage common solutions but leave space for discussion if participants starkly disagree.

Identify Stakeholder Actions and Next Steps:

In the later phases of an initiative or dialogue, participants decide who will implement which activities to achieve the prioritized solutions. Informal agreements made amongst the group of dialogue participants at this stage, thereby increasing the transparency, trustworthiness, and perceived fairness of the agreements. If conflict is highly entrenched, participants may not be ready to agree on specific actions. The next step in these situations may be to hold another dialogue or forgo future dialogues.

Dialogues can sometimes fail. This may occur when conflicts are more entrenched or politically charged than originally understood. In TFD’s experience, this has occurred during an initiative where many stakeholders were not ready to seek agreement. The issue was rooted deeply in core beliefs. Thus, there were no actors who were able to bridge the divide - this event in TFD’s history has emphasizes the importance of clearly assessing stakeholders for their willingness to engage in dialogue and move toward change before implementing.

The results from each dialogue are captured in a Co-chairs’ Summary Report. All participants can give input but the co-chairs have the responsibility of reflecting the key challenges, solutions, and areas of disagreement in the report. Because of its collaborative nature, the Co-chairs’ Summary Report is an integral document for advocating for solutions at multiple governance levels.

The results of a dialogue represent a powerful contribution to most policy discussions: agreed-upon recommendations. Based on TFD’s experience, policy change from dialogues often happens at three levels: sub-national and national, international, and institutional.

At the sub-national and national level, host organizations and other local stakeholders leverage the Co-chairs’ Summary Report to advocate for national and sub-national-level change. This change has taken the shape of policy reform, augmented private sector-community engagement, and increased representation of marginalized voices in formal processes. At the international level, dialogue results are most impactful when they are combined with the results of other dialogues within the same initiative. At the end of an initiative, the Advisory Group, co-chairs, select leaders, and the Secretariat synthesize the initiative’s conclusions into a TFD Review initially drafted during a Writer’s Workshop. Workshops are limited to 10-15 people.

The TFD Secretariat, Steering Committee, and other stakeholders can use TFD Reviews and Co-chairs’ summaries to advocate for change at global forums, within other partnerships, and among other international partners. In the past, initiative results have influenced REDD policy, created new alliances of rights holders, and changed processes around illegal logging.

Change also occurs within and across institutions. TFD’s SC members have leveraged results within their organizations. Following a TFD initiative on Intensively Managed Planted Forests, WWF implemented the initiative’s outcomes through the New Generations Plantations platform. Similarly, the World Bank has integrated TFD outcomes into past programs and policy-reforms. The three levels of change; sub-national and national, international, and institutional; are levels at which TFD outcomes often make an impact.

Steering Committee members can advocate for change individually however, doing so misses a significant value of dialogues. Dialogues convene stakeholders representing many industries, perspectives, and interest groups who, when working in coalition, can leverage significant change across sectors. TFD and its Steering Committee work with participants to facilitate collaborations among themselves to implement the actions decided-upon during initiatives.

TFD evaluates its initiatives at three different points: at the end of a dialogue, during the annual Steering Committee meeting, and at the end of an initiative. These evaluations enable TFD to proactively reflect, learn from others, and adapt its practice.

During their annual meetings, the Steering Committee reviews and evaluates all initiatives. These evaluations are based on qualitative reflections and observations. SC members assess: what phase each initiative is in, if the initiative is on track to producing solutions, if field dialogues are exemplifying the issue, and what are the greatest challenges for each Initiative. The last formal evaluation process occurs at the end of every initiative.

At the next Steering Committee meeting following the end of the initiative, the entire Steering Committee reflects on the initiative—what was accomplished, what challenges remain, and what’s next? These questions are also discussed during the Writers’ Workshop. The learnings from this evaluation are incorporated in the initiative’s TFD Review and are used to redirect work if needed. TFD uses these evaluations to inform, adapt, and reevaluate dialogues and initiatives. Learnings from one initiative feed directly into the design and planning of the next initiative. In this way, TFD is always updating dialogues based on the latest knowledge and upholding their credibility and legitimacy.